Needing 178 to win, Royal Challengers Bangalore got off to a sensational start thanks to a masterclass in stroke-making by Devdutt Padikkal.

Virat Kohli started off with a six over Shreyas Gopal’s head in the first over but post that it turned out to be a Devdutt Padikkal show.

The flamboyant Karnataka opener shrugged off his indifferent form and launched a stunning assault on the Rajasthan Royals bowlers.

He cut, he pulled, he flicked, he slog-swept, he smoked a six on the up over extra-cove before depositing the fast bowler for another disdainful six over wide long-off. 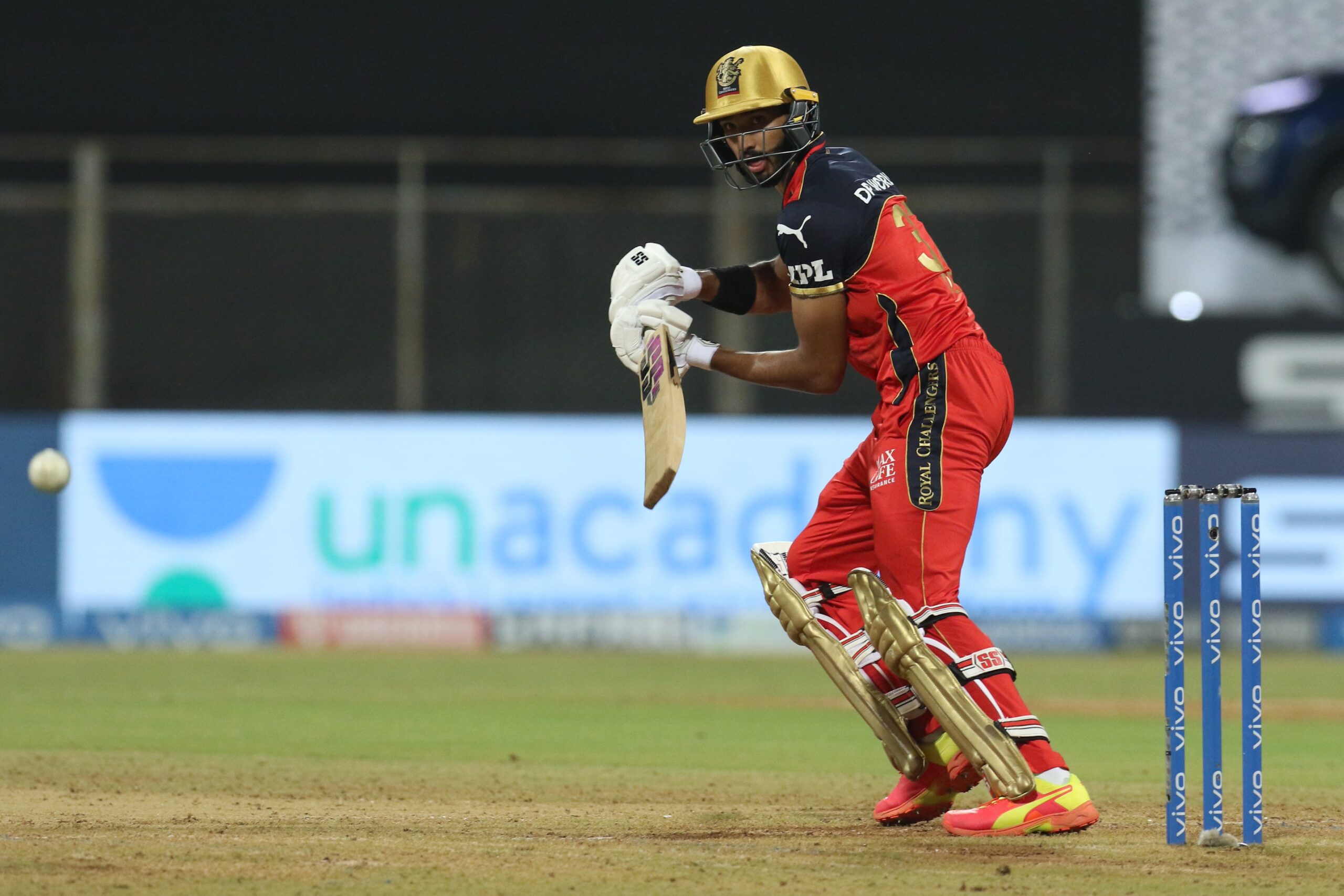 The stylish southpaw brought up his half-century with another stylish cover-drive off Riyan Parag and he celebrated that by smashing the spinner with a six over the bowler’s head.

Such was Padikkal’s onslaught that even Virat Kohli was forced to play second-fiddle. He was in the zone. And that was displayed to the hilt in the very next over when he walked out of his crease and mowed Rahul Tewatia for a six over his head before slog-sweeping him for another maximum.

And, it didn’t really matter who was bowling. Mustafizur Rahman was introduced back in the attack to stop the onslaught but even he was deposited into the deep square-leg as RCB raced to 0/107 after 10.

Virat Kohli struggled for his timing initially but the champion batsman regained his touch and timing as his innings progressed. Kohli unleashed his competent repertoire of strokes and in the process, he also notched up his 40th IPL fifty besides becoming the only player to rack up 6000 IPL runs.

But it was the night of Devdutt Padikkal. The left-hander notched up his maiden IPL ton with another sumptuous cover drive to become the third-youngest centurion in IPL history as Royal Challengers Bangalore completed a ten-wicket hammering of Rajasthan Royals.

Having opted to bowl first, Royal Challengers Bangalore got off to a sensational start thanks to a brilliant spell by Mohammed Siraj.

Siraj was taken for eight runs by Jos Buttler in the first over but the seeds of the latters dismissal were sowed in that over itself as the right-arm pacer troubled Rajasthan Royals’ swashbuckler via inswinger.

And, Siraj reaped the rewards in the next over. It all happened on the third ball of his next over when Jos Buttler moved to the leg-side and exposed his stumps in order to heave the pacer over extra-cover.

The right-hander bowled a straight ball, which Jos Buttler missed and, as a result, it proceeded to knock over his leg stump.

Manan Vohra once again flattered to deceive as, after stroking a couple of fours, he threw it away by holing out at long-on after mistiming a lofted drive off Kyle Jamieson.

Siraj struck again in his next over as he trapped David Miller plumb in front with a toe-crushing yorker, reducing Rajasthan Royals to 3/18.

Sanju Samson played some cracking strokes during his 18-ball 21 including a six off Washington Sundar in the 8th over. But, as has been the case with Samson over the years, he once again flattered to deceive by holing out at short mid-wicket in what was a pretty soft dismissal. At 4/43 it looked doom and gloom for Rajasthan Royals but a brilliant 66-run-stand between Shivam Dube [46 off 32 balls] and Riyan Parag [25 off 16] brought some momentum back in the innings. The partnership was finally broken by Harshal Patel [3/47 in 4 overs] as Parag, in an attempt to scoop the pacer over fine-leg holed out.

Shivam Dube also perished for the cause but Rahul Tewatia- 40 off 23 balls] courtesy of his pyrotechnics ensured that the Royals finished with a competitive 9/177 in 20 overs. As for Royal Challengers Bangalore, Mohammed Siraj [3/27] was the pick of the bowlers, as was Kyle Jamieson, who gave away just 28 runs in his quota besides taking one wicket.

Fantastic innings from young Padikkal. And this year @RCBTweets are in ominous form, which is great to see. Kohli and Padikkal made it look very easy. #RCBvRR pic.twitter.com/fIUC9lImjP

This is a serious show of strength from @RCBTweets . And this innings from Kohli is the icing on the cake

6000 plus for @imVkohli well played. Today it has been a demolition act from @RCBTweets @devdpd07 was sublime. And you also have Shubman Prithvi Ishan! Indian cricket is spoilt for riches.

Much much deserved. Special knock. Great to see @devdpd07 @RCBTweets

That was some hammering.
RCB fans Watching Padikkal and Kohli today.#RCBvRR pic.twitter.com/0iktiyZ8Wh

Devdutt Padikkal's batting so effortless. His batting and his timing absolute treat to watch.

Virat Kohli in T20's at the Wankhede:

I will take 177 from being 40/4 anyday but the question is that enough at Wankhede! Good batting by the lower middle order of @rajasthanroyals to put up a fighting total! Interesting to see how @RCBTweets go about it! #RRvsRCB

What a knock from Rahul Tewatia 🔥

Would you like to see him in India's T20 XI?#IPL2021 pic.twitter.com/hYIZIoPWgC

18 for 3 to 177 for 9 – good recovery by #RR lead by Tewatia, Dube and Parag. Siraj was phenomenal as always and Kyle Jamieson doing well for #RCB is good news moving forward.

Two unsung players, Shivam Dube and Riyan Parag, pulling RR out of a deep crisis and also holding up mirror to the more illustrious batsmen in their team

Sanju Samson so much talent but not so much commitment to play every ball on its merit.

The growth of Siraj continues. It is a joy now to see him bowl. Kiraak bowling karra bachha!

What a ball, Siraj. Outstanding.

What. An. Absolute. Peach!

Captain Kohli's decision to keep Siraj on for a 3⃣rd over has worked!

English Counties Offer To Host The Remainder Of IPL 2021

IPL 2021 Suspended: BCCI To Look At A Possible Window Before The T20 World Cup- Sourav Ganguly