Spinner Akeal Hosein shocked the cricketing world by taking a one-handed exceptional catch during the Caribbean Premier League (CPL) 2021 game. Notably, his outstanding catch was witnessed in the match between Trinbago Knight Riders and the Guyana Amazon Warriors.

However Ravi Rampaul’s 18th over changed things completely and he bought his team back into the game. Notably, Rampaul dismissed Brandon King in the first ball itself. Also, Nicholas Pooran was dismissed on the very next delivery of the over, as he was caught by Akeal Hosein on the boundary. Notably, Pooran hit a powerful stroke and it looked like the ball will cross the fence. However, it didn’t happen as Akeal Hosein was standing near the fence.

The 28-year-old jumped high up in the air to grab the one-handed stunner to complete the catch. The catch carried him back towards the boundary but he made sure that he didn’t touch the ropes.

Watch the video of the incident here: 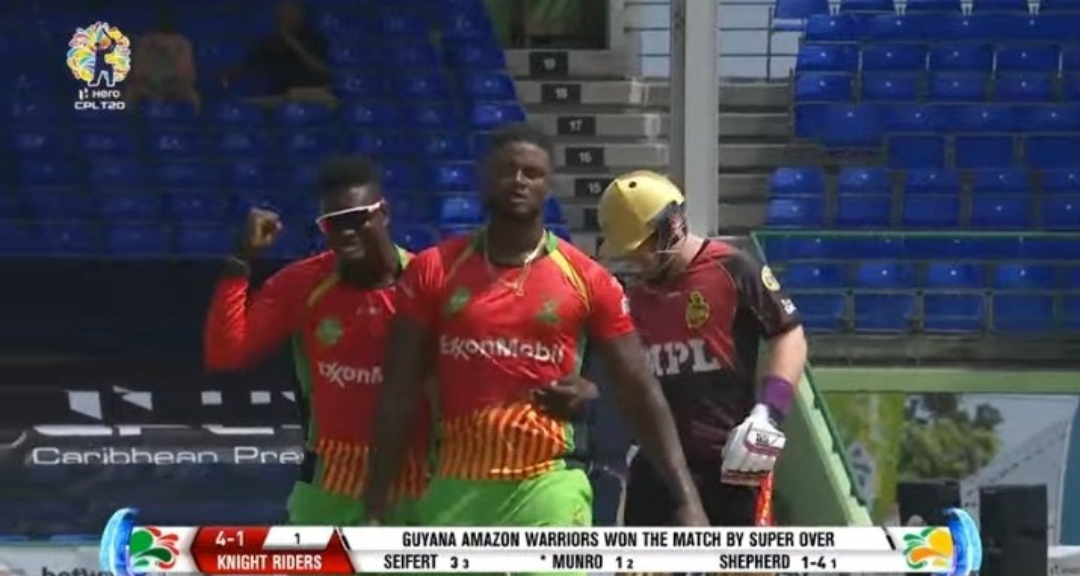 Although Ravi Rampaul picked 2 back to back wickets he ended that over conceding 12. Meanwhile, the former Sri Lanka pacer smashed 14 runs in the next over and the Warriors needed only 8 runs to win in 6 balls. However, Akeal Hosein did an amazing performance with the ball and only conceded 7 runs and the game went into super over.

In the Super Over, Sunil Narine looked amazing and he did an excellent job for the Knights. And he gave only 6 six runs in that over picking 2 wickets. While batting Knight Riders only managed to score four runs from six balls and ended up losing the match.

Also Read: When A Player Like Virat Kohli Is Being Caught At Slips For Five Innings In Row, I Feel Like Footwork Is The Problem: Harbhajan Singh