Michael Vaughan was among those who had questioned England’s tactics to delay the declaration on the fourth evening of the series opener.

Even as England was so far ahead in the game, the visitors’ tactics in their second innings baffled everyone including pundits like Vaughan and Shane Warne as the tourists neither forced the issue nor did they try to declare.

Eventually, the declaration never arrived as Ravichandran Ashwin’s six-wicket haul helped India bowl England out for 178 and an overall lead of 419.

Michael Vaughan and Shane Warne then proceeded to engage in an interaction on Twitter where they questioned England’s defensive tactics.

I think he is being get too cautious and is giving India a good chance of getting out of this Test with a draw .. https://t.co/OYGVe8UToI

Eventually, it did not matter in the end as James Anderson put on a reverse-swinging masterclass on the fifth morning to break the back of India’s batting-unit.

Anderson sent the stumps of Shubman Gill and Ajinkya Rahane on a cartwheel within a space of four balls to turn the contest decisively in his side’s favor.

Virat Kohli held the fort for the home side with a brilliantly composed 72 but what it did was just delay the inevitable as Leach, Stokes, and Archer polished off the remaining wickets in the afternoon session.

Following the 227-run win, the Instagram handle of England Cricket took a dig at those who had questioned the visitors’ tactics. Sharing a picture of skipper Root making the DRS sign, England Cricket wrote- “Everyone who moaned about the declaration yesterday #INDvENG #Cricket #EnglandCricket.”

A post shared by We Are England Cricket (@englandcricket)

Stuart Broad was quick to reply to the post where he took a cheeky dig at his former captain for questioning his side’s approach on day 04. He replied: ‘Think that’s aimed at you @michaelvaughan?!’ 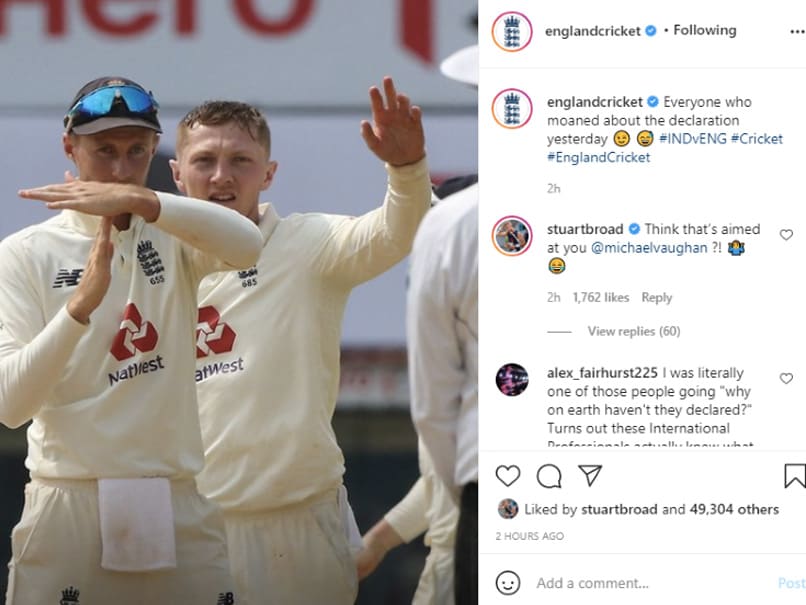 Also Read: India vs England 2021: James Anderson Has ‘Done It’ In All Conditions – Kevin Pietersen

I Think Umpire’s Call On Stumps Should Stay, But On Pitching And Impact Should Be Eradicated – Ben Stokes