March 15 will go in as a big day for Jasprit Bumrah as he took the next step in his life and got married. Bumrah married sports presenter and TV host Sanjana Ganeshan. The duo had been very successful in keeping their romance and the news of their nuptials under wraps.

Things began to come to light when Bumrah had asked the Board of Control for Cricket in India (BCCI) was leaves after the fourth Test against England concluded and India won the match and the series. India also qualified for the final of the World Test Championship as well.

Bumrah was not selected for the five-match T20I series and is not probably going to be picked for the upcoming three-match ODI series as well. This gave wind to the rumors that the ‘personal reasons’ for which Bumrah had asked for leaves, was because of his pending nuptials.

It was later revealed that Bumrah and Ganeshan had tied the knot in Goa in mid-March. It was a very private event attended by the families of the two and close friends. Bumrah brought an end to the suspense as he made the news official through his social media accounts on Monday.

Both Bumrah and Sanjana shared two photographs each from their accounts. Both of them shared a couple of photos on their Instagram and Twitter with the same caption.

“Love, if it finds you worthy, directs your course. ”Steered by love, we have begun a new journey together. Today is one of the happiest days of our lives and we feel blessed to be able to share the news of our wedding and our joy with you. Jasprit & Sanjana,” the caption read.

Bumrah played 2 Tests against England and picked 4 wickets. He will most likely be seen now playing in the IPL 2021 for the Mumbai Indians. The defending champions will play Royal Challengers Bangalore in the tournament opener on April 9 at the MA Chidambaram Stadium in Chennai.

The final of the tournament will be played at the Narendra Modi Stadium in Ahmedabad. Mumbai, Delhi, Kolkata, Ahmedabad, Chennai, and Bengaluru are the hosts of this year’s IPL 14.

Also Read: Breaking News: Last 3 T20Is Between India And England To Be Played Behind Closed Doors

Here are the photos from Jasprit Bumrah- Sanjana Ganeshan wedding and pre-wedding ceremonies: 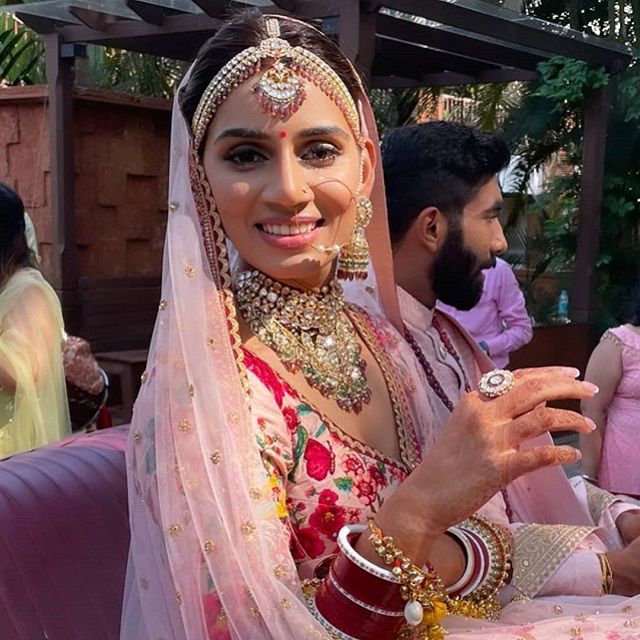 We Are Happy When The Other One Is Happy, Guys Enjoy Each Other’s Success A Lot – Mohammed Shami Speaks About The Bond Between Indian Pacers

We Like Pulling Each Other’s Leg, But Jasprit Bumrah Doesn’t Joke Around Much – Mohammed Shami