Watch: Prithvi Shaw Hits Back At His Critics With A Fan-Made Meme

Young Indian opener Prithvi Shaw has finally regained his form that had deserted for most parts of the last calendar year.

After having smashed a whirlwind 89-ball 105 in the opening game of the season against Delhi, Prithvi took apart a hapless Puducherry bowling-unit to notch up his maiden List-A double-hundred.

Shaw smashed a barely believable 152-ball 227- an innings which included 31 fours and five sixes- and in the process, he broke a whole host of records.

The 21-year-old broke the record for the highest-ever score by a captain in List A cricket. The previous record-holder was South Africa’s Graeme Pollock, who had smashed 222 runs against the Border team back in 1974.

As far as the record of the highest List A score by an Indian captain is concerned, it was previously held by Virender Sehwag, who had scored 219 in an ODI against the West Indies in 2011.

His returns in the Vijay-Hazare Trophy come as a welcome relief for Prithvi Shaw. The youngster had endured a forgettable IPL 2020 where he managed just 228 runs in 13 games at an average of 17.53.

It went from bad to worse for Shaw during the Australian Test series where his technique against the moving ball. He was subsequently dropped from the playing 11 and then from the squad ahead of the England series.

As a result, the young opener was mercilessly trolled on social media.

And, so, now that he has regained his form, Prithvi Shaw hit back at his critics after he posted a fan-made meme post in one of his Instagram stories. 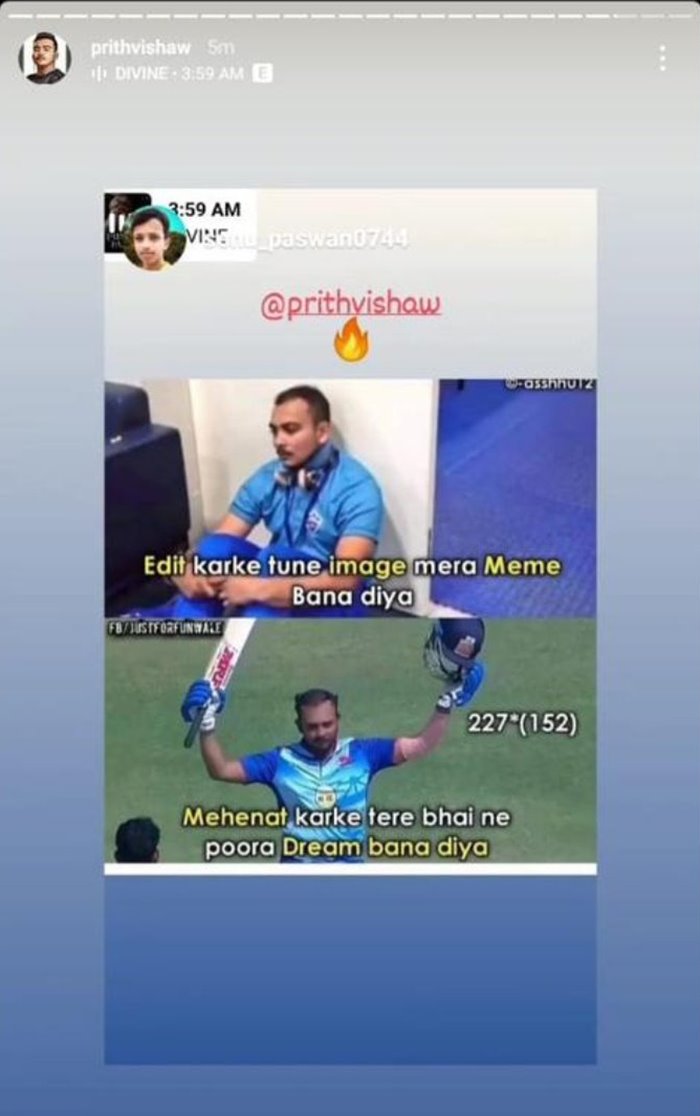 IPL 2021: Twitter Hails Deepak Chahar As He Produces A Marvelous Spell Of Bowling Against Punjab Kings

Explained: Why Prithvi Shaw Changed Bat Sponsor From MRF To SG Ahead Of IPL 2021

IPL 2021: 3 Stars Who Can Be Game Changers For Delhi Capitals Against Rajasthan Royals