The mammoth home season began as well as ended on a perfect note for Virat Kohli. The India skipper, after guiding the team to 2-0 Test series win against West Indies where he scored his maiden double century, led the team to Test series wins over New Zealand, England, Bangladesh and Australia as Team India not only reached the pinnacle of Test cricket but also consolidated their position as the top-ranked side. Kohli also enjoyed a brilliant season with bat scoring double centuries against New Zealand, England and Bangladesh.

In January, he became India’s skipper in all the three formats after MS Dhoni‘s resignation and made an immediate impact, leading the Men in Blue to ODI and T20I series wins over England which was followed by the series win over Australia as India’s long season ended perfectly. 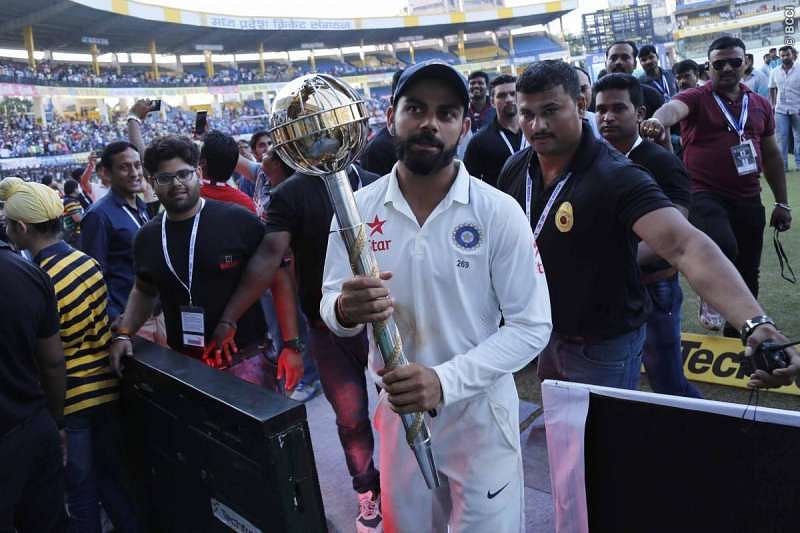 But then began the tough phase for Kohli. After missing the few games of the Indian Premier League due to injury, he could not inspire his team to another good season as they finished the season at the bottom with Kohli managing 308 runs in 10 matches.  But the right-handed batsman hit the top gear just when it mattered the most, scoring 253 runs with the help of three fifties to help India make it to the final of the Champions Trophy.

But his brilliant performance both as a batsman and a captain in his maiden ICC event was marred by an alleged rift between him and coach Anil Kumble which concluded with the latter stepping down from his post just a couple of days after the Champions Trophy. Kumble also revealed that he chose to walk away after being informed of Kohli’s issues over his style of functioning. The accusation by Kumble made several former players criticise Kohli but the Delhi star responded in style, leading the team to an ODI series win in West Indies.

With the hectic schedule coming to an end, the India star flew off to USA with his girlfriend Anushka Sharma and rightly said that it was a much-needed break. Kohli took to Instagram to post a selfie of Anushka with himself and wrote:“Much needed break with my ❤.”

Here are some pictures of the couple enjoying a vacation in the US:

I Feel For Ashwin; You Can’t Keep Him Out Of The Playing XI: VVS Laxman

India vs England 2021: Virat Kohli Confident Of The Team’s Preparations Being Better Than Past