England cricketer Stuart Broad has given clarification on an incident that occurred during Day 2 of the Lord’s Test against India. A picture of Rory Burns stamping the ball went viral and Broad gave an explanation as to how it happened.

England is currently fighting it out against India in the second of the 5-match Test series at Lord’s. The scales are tilted in the hosts’ favor, after a magnificent fighting century from skipper Joe Root. However, there was one moment that caught the eye of Indian fans. 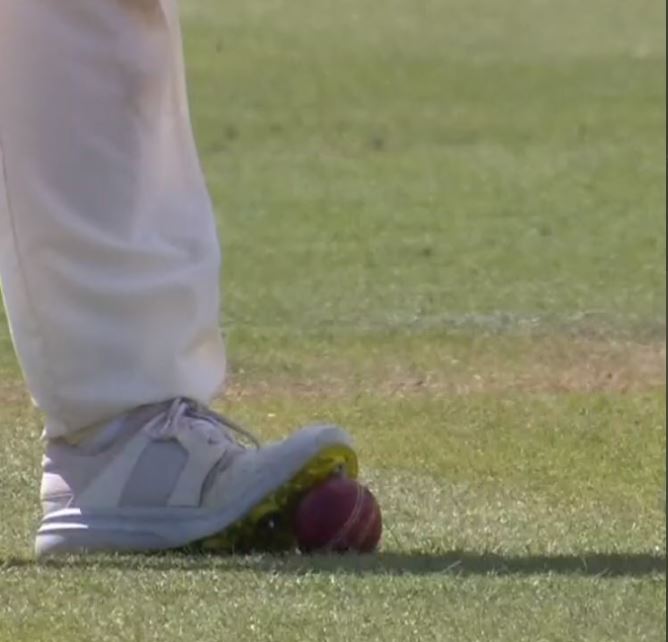 It happened on Day 2 during India’s first innings. England pacer Mark Wood kicked the Dukes ball towards teammate Rory Burns who appeared to step on it with his spikes. The video immediately went viral, with several fans claiming it as ball-tampering.

Seeing the reaction to the incident, 35-year-old Stuart Broad, who is out of the Test series having suffered an injury, took to social media in order to clarify the happenings. On his official Twitter handle, the pacer wrote:

“My comments are- Woody tried to nut-meg Burnsy by tapping the ball through his legs (a very common occurrence) & he missed and kicked the ball there by accident. Instead of screenshotting the pic, watch the video- quite plain & easy to see.”

My comments are- Woody tried to nut meg Burnsy by tapping the ball through his legs (a very common occurrence) & he missed and kicked the ball there by accident. Instead of screenshotting the pic, watch the video- quite plain & easy to see

As I’m sure you’re aware form watching the full footage- it wasn’t deliberate was it. End of Story

See my past comments. Watch the video. Of course it’s wasn’t.

Prior to the start of the second Test at Lord’s, England received the news of their experienced campaigner, Stuart Broad, being ruled out of the entire Test series. He sustained a muscle tear in his right calf, as confirmed by an MRI scan he underwent on August 11, Wednesday.

He was replaced by Saqib Mahmood in the squad, who didn’t make it to the playing XI. In Broad’s place, speedster Mark Wood was brought in. As things stand in the second Test, the hosts had their noses in front, having taken three wickets in the first session of Day 4.

First-innings centurion, KL Rahul, and his opening partner Rohit Sharma were dismissed. Captain Virat Kohli looked fluent until he chased an away-going delivery off Sam Curran. At lunch, India was 56/3, leading the English by just 29 runs.