Australia’s pace spearhead Mitchell Starc will be given time to prove his fitness ahead of the Boxing Day Test, but his new ball partner Pat Cummins feels Starc’s foot injury can make him sit longer on the bench if not appropriately treated.

Cummins stated that Starc has a 50-50 chance of overcoming a bruised heel, but the selectors have indicated they will have a cautious approach given that the Ashes urn has been regained.

The 24-year-old Cummins also suffered a similar injury following his Test debut in 2011 which kept him out of the game for months. He felt that his teammate Starc is raring to go in the Boxing Day Test which will be just his second Boxing Day Test.

But with an important tour to South Africa lined up in the upcoming New year, the Australian team management will not likely to risk their strike bowler when the series has already been pocketed. 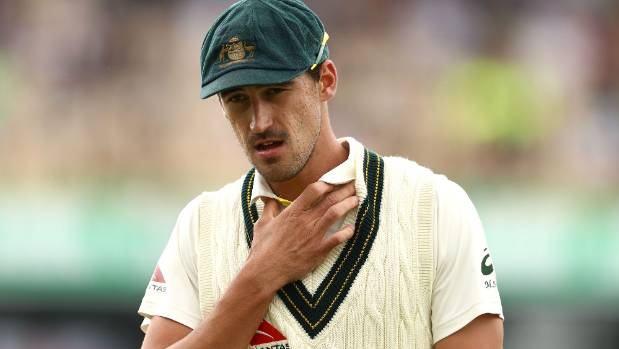 “It’s a funny kind of injury. It’s not super common, but if it’s not treated well, it can drag on for a very long time. It’s a bruise pretty much where you’ve got to walk all day and bowl,” Cummins stated earlier today.

However, Cummins is confident about the fact if Starc is not 100 percent fit he will put his hand up.

“I chatted with him about it. I had a similar one on my Test debut, and it’s one of those ones where there’s no way around it. You can’t strap it. Differently, you can’t bowl off the other foot or anything. It’s hard to hide. So (you have to) try and get it early enough and not try and really, really damage it. It can be a long process trying to get it right. He knows that the staff knows that and I’m sure they’ll work it out,” Cummins further stated.

Also Read: Ben Stokes to not Feature in Ashes; Returns to England

Starc, who was sporting a large compression shock on his right ankle didn’t take part in the practice sessions and was spotted talking with team coach Darren Lehman, selector Greg Chappell, and team doctor Richard Saw.

Jackson Bird will be roped in the first XI if Starc can’t make it to the squad, which will be his first Test since last year’s Boxing Day Test having spent the most of the time with the squad.

With the urn regained, Cummins admitted the focus would be on upcoming tour to the Rainbow Nation.

“I’d say that’s certainly the thinking of a lot of people; the selectors, the skipper and everyone around him,” Cummins said about the South Africa tour. Bird, who was with the Australian squad for their recent tour to the subcontinent, said he is ready to go if given an opportunity.

“I hope for Mitch’s sake his heel’s not too serious and he does get up. But it’d be unbelievable to play an Ashes Test on Boxing Day. Either way, I’ll be ready,” Bird admitted.

IPL 2021: 3 Stars From Sunrisers Hyderabad Who Can Be The Game Changers Against Kolkata Knight Riders

“What We Can Do?” – Pat Cummins On Washington Sundar Naming His Pet Dog ‘Gabba’