All-rounder Shakib Al Hasan admits their win over Zimbabwe puts them in good stead for the rest of the tournament including Sri Lanka.

Bangladesh ended the new year with a disastrous tour to South Africa getting poorly thrashed in all formats of the game.

Bangladesh came up with all-round brilliance to beat lower-ranked Zimbabwe in the series opener. Shakib feels the win was necessary considering some results in the recent past.

Bangladesh crossed the target set by Zimbabwe in just 28.3 overs on the back of an unbeaten fifty by Tamim Iqbal after Shakib’s three-wicket haul and some tight bowling from the pacers helped them bowl out Zimbabwe for 170 runs in 49 overs. “It is important to start a new year on a winning note. Momentum is also necessary in a tri-series. It will be a good confidence boost for us ahead of a tougher challenge against Sri Lanka,” Shakib said after the match.

“Our win was predictable. I expected them to bat better, but I think we bowled really well today,” Shakib added further.

“Rubel always bowls when batsmen are set and scoring runs, he always delivers for the team,” Shakib stated. 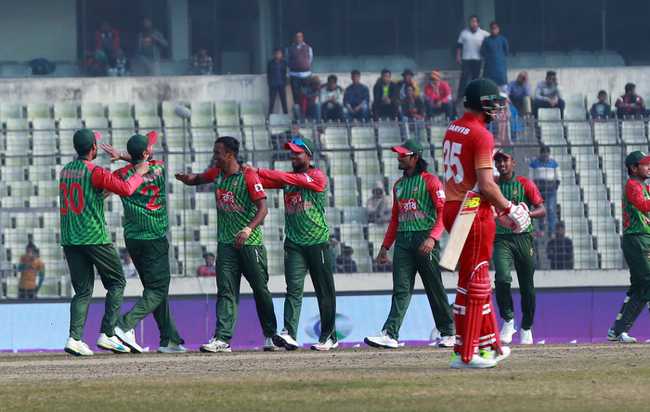 Following his bowling exploits, Shakib notched up with 37 runs to complete an all-round effort. He seemed excited to bag the No 3 batting position.

“This was my third innings at this position. It is a new challenge, which makes the game more enjoyable. I am hoping to score a big one after getting set. Those who bat at No 3 or 4, they have to make use of good starts,” he pointed out.