Defending champions India defeated Pakistan by two wickets to win the Blind Cricket World Cup for the second time in a row.

India has played all their league games in UAE after the Foreign Ministry denied their visit to Pakistan. Cricket Association of the Blind in India (CABI) and Pakistan Blind Cricket Council (PBCC) agreed to shift India’s matches to UAE.

Pakistan posted 308-8 in 40 overs after India won the toss and sent Pakistan to bat first.

Here is the video of the final India v Pakistan match:

Badar Munir was the standout performer with 57 runs, while Riasat Khan and skipper Nisar Ali chipped in with useful contributions with 48 and 47 runs, respectively. 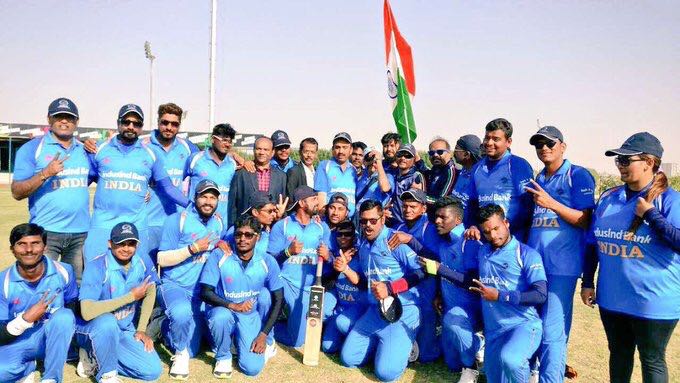 In reply, India crossed the line losing eight wickets in 38.2 overs. Sunil Ramesh played a magnificent knock of 93 and was well cushioned Ajay Reddy, who made 62.

India continued their dominance as they beat Bangladesh by seven wickets at the MCC Ground in Ajman to book its place in the finals of the fifth edition of the tournament. Meanwhile, Pakistan had thrashed Sri Lanka by 156 runs to enter the finals.