Virat Kohli is currently the boss of this Indian Cricket team

Coach of the Indian Cricket team, Ravi Shastri recently expressed immense pleasure at Virat Kohli’s  development on and off the field in the recent years. Shastri further admitted that Kohli’s maturity had had a positive impact on the team’s success. Shastri further stressed that Kohli is the one, who is in charge of the team; however, he had no obligation to implement coach’s suggestion. 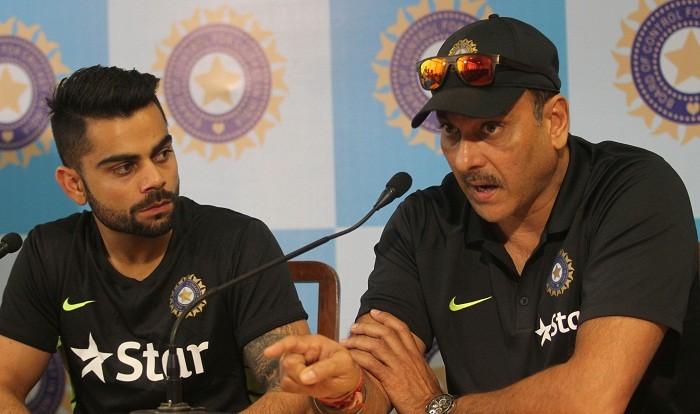 “[The] equation is great. We are similar personalities. There is an element of trust in our relationship. We are both strong-minded, both play to win at all costs. We play to win. We don’t go there to do time-pass,” Shastri said during a chat session with a news channel.

Shastri further admitted that the mindset of the players have changed and now the players are there to compete and want to take the game forward.

Shastri also talked about situations where two opinionated persons like Kohli and him had a difference of opinion but admitted that there was no conflict in between them.

“It’s a dialogue. See, at the end of the day, the captain is the boss. He might ask me my suggestions. It doesn’t mean he has to agree with my suggestion. Because what I am looking for is for him to have his own mind and take the decision. We are there in the support staff to give suggestion which might help so there is a dialogue. I might believe in a certain combination.”

Shastri was appointed as the head coach in July, earlier this year after Anil Kumble resigned from the prestigious post and was given a two-year contract till the 2019 World Cup. Earlier, the all-rounder Shastri served as the team director from August 2014 to April 2016.

The 55-year-old Shastri was in full praise of Kohli’s development as a cricketer and admitted that he would evolve more in the coming years. He also talked about a calmness in Kohli’s personalities which has benefitted the team.

“I think he’s very good. You can see that maturity coming. He is still young. He is 29. He has seven-eight years still left in his career easily. I mean, he can captain the side for at least six-seven years from here. And you can see him evolving,” Shastri stated.

Shastri also explained in detail how the India skipper has developed over the years off the field.

“You see, with the exposure you learn. He is public property. Wherever he goes he is hounded. So he has realized as a captain, there are certain ways you are going to behave. There are certain do’s and don’ts and he has done a wonderful job,” Shastri mentioned.

Shastri further distinguished what makes this team set apart from the past Indian team.

Shastri further talked about certain things which this team has witnessed for the first time in Indian cricket like beating England after 24 years in a one-day series, whitewashing Australia in a T20I series, beating Sri Lanka back to back, twice and of course the record at home.

“They know they are there and what’s good is that the nucleus of the players is pretty much the same from what it was in 2014 and the same bunch, I see them being together for another four to five years. That makes the biggest difference. They can achieve and go places in the next three or four years.” Shastri signed off.