Follow India vs Pakistan Dream11 Prediction Only On Cricketaddictor.

Scotland exhibited impressive performances in the first round to qualify for the Super 12 round.

They won all their three games to top Group B of the first round. Scotland began their campaign with a 6-run win over Bangladesh and followed it with two more wins over Papua New Guinea and Oman. Scotland bundled out Oman for just 122 runs in their last game.

Aqib Ilyas, M Nadeem and Zeeshan Maqsood made a vital contribution, however, despite that Oman failed to put on a big score on the board. Scotland kept picking wickets at regular intervals and didn’t allow Oman to get the flourish needed in the final five overs. Once again for Scotland, Josh Davey was the standout bowler as he picked 3 for 25 in 4 overs. Safyaan Sharif too chipped in with two wickets. 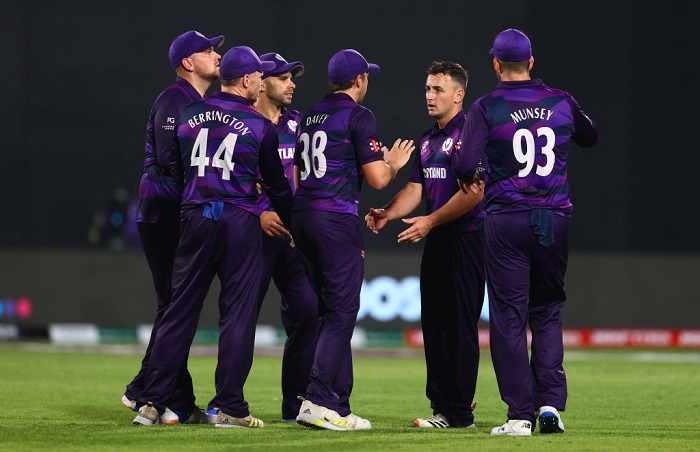 For Scotland, all four batsmen in the top-four made runs in the second innings. George Munsey (20 off 19) once again got a start but couldn’t convert that into a big score. Much to their delight, the skipper got runs under his belt and this will give him some confidence heading into an important encounter. He played a vital 41-run knock off 28 balls to help his team cross the finishing line. Mathew Cross (26 off 35) and Richie Berrington (31 off 21) stayed unbeaten and chased down the score in 17 overs.

On the other hand, Afghanistan will begin their ICC T20 World Cup campaign on Monday. They would be happy to start their ICC T20 World Cup campaign at Sharjah Cricket Stadium, given the kind of spinners they have. There is no denying that Afghanistan’s strength is their world-class spin attack. The likes of Rashid Khan, Mohammad Nabi, and Mujeeb Ur Rahman would be excited to bowl on UAE tracks.

Their batting, however, is a weak link. Afghanistan have a nice list of power-hitters in their squad. Rahmanullah Gurbaz, Hazratullah Zazai and Mohmamad Shahzad all can hit the ball far and long. However, consistency is a concern for them. The batsmen haven’t been consistent enough with their performances. Someone needs to anchor the innings for them or things might go wrong for them on the slow track of Sharjah Cricket Stadium.

The slow and sluggish track at the Sharjah Cricket Stadium has proved to be a nightmare for the batsmen. The bowlers have enjoyed bowling here.

The batsmen of both teams would look to make a great start in the powerplay. The pitch is likely to slow down as the game progresses which makes it harder for the batsmen.

Anything between 140 and 160 is a par score here. Both the teams would look to bat first upon winning the toss.

The temperature here will be hot and humid. The conditions here should suggest that there is no possibility of rain. One could expect a good game of cricket. The average temperature will hover around 42-degree Celsius.