Australian swashbuckling opener David Warner’s brother, Steve, took to Instagram on Sunday to slam the SunRisers Hyderabad think-tank for sacking the 2016 IPL winning captain and one of the greatest-ever cricketer to have ever played in the cash-rich league ahead of their encounter against Rajasthan Royals on Sunday.

The last 24 hours have been an absolute nightmare for David Warner and his family after the southpaw was shockingly released from his leadership duties following a rare lean season this year with the bat and as captain.

Warner, who has scored as many as 3271 runs in just 71 innings at an average of 55.44 and a strike rate of 146.9- since the start of IPL 2014- the most by any batsmen during the time frame, has seen his strike rate fall alarmingly since the last IPL.

He still managed to smash in excess of 500 runs last season despite a poor strike rate but this year, even the runs had dried up. In six innings this season, David Warner has managed just 193 runs at a strike rate of 110.29.

In previous seasons, Warner’s sustained belligerence at the top used to mask SRH’s middle-order woes but with the southpaw himself struggling to score enough runs, the middle order has been exposed to the hilt and that has led to the ‘Orange Army’ bottle plenty of winning positions.

But, the sacking of David Warner is still very shocking given the fact that this is the first time since 2014 that the southpaw is having a poor season by his standards and also that it’s their misfiring Indian middle-order batsmen that are the elephants in the room and not Warner.

Not only has David Warner been sacked as captain but he has also lost his place in the starting XI with SRH opting to play an all-rounder in Mohammed Nabi.

Their middle-order once again failed to do anything in their first fixture of the post-Warner era as they lost the game by 55 runs in their run-chase of 221.

Warner’s brother, Steve, just like his millions of fans, took to his social media account on Sunday where he schooled the SunRisers about the issues that plague their team besides reminding them about the southpaw’s contribution for the franchise over the years by posting stat infographics.

“A bloke that has carried this team for years, your openers aren’t the issue. How about getting a decent middle-order that scores some runs,” Steve captioned his Instagram post. 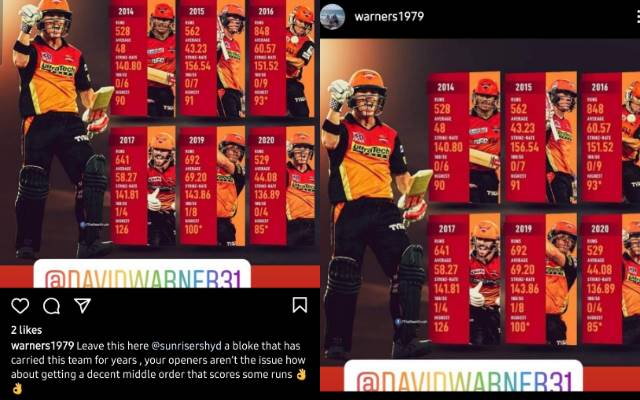 Chetan Sakariya Was A Revelation, His Attitude, His Ability To Deal With Pressure, And Of Course, His Skill All Impressive: RR Coach Kumar Sangakkara