CSK vs MI: Twitter Fumes As DRS Is Not Available During Today's Match Between CSK & MI At Wankhede
Skip to content

A controversial incident took place in the 59th match of the Indian Premier League (IPL 2022), which is being played between MS Dhoni-led Chennai Super Kings (CSK) and Rohit Sharma-led Mumbai Indians (MI) at the Wankhede Stadium in Mumbai, as Devon Conway after getting adjusted out LBW was unable to use DRS because of its unavailability.

Chennai Super Kings were off to the worst possible start in the match against Mumbai Indians, after losing the toss and batting first, as they lost two huge wickets in the first over itself. 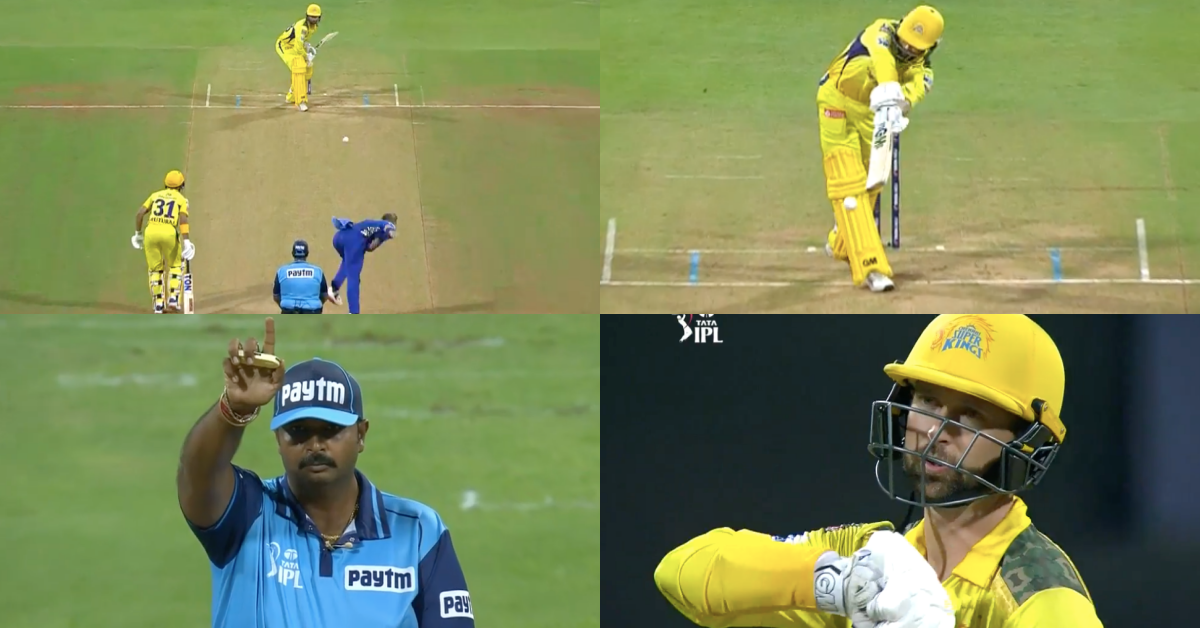 Mumbai Indians all-rounder Daniel Sams was able to dismiss in-form opening batsman Devon Conway for a golden duck and Moeen Ali for a 2-ball in the first over itself.

Notably, Conway tried to play a flick shot but he completely missed it and the ball hit the pads and even though it looked like the delivery would go down the leg and miss the stumps, still, the on-field umpire raised his finger and Conway was adjusted out LBW.

Also, Conway was not able to use the DRS because it was not available. The real reason behind its unavailability was the power cut at the Wankhede Stadium in Mumbai.

“Before the toss, there was a short circuit and there was an issue in the system. Because of this, the toss was delayed. One floodlight tower wasn’t getting enough power supply. The officials are working to restore the system,” a Mumbai Cricket Association official told The Indian Express.

Meanwhile, the DRS was finally available from the 5th over of the match as the power issue was sorted out. However, the damage was already done because Chennai Super Kings lost Devon Conway, who has been in red-hot form since returning to the playing XI.

Also, Chennai Super Kings (CSK) fans on Twitter were left furious after the opener Conway was not able to use DRS due to its unavailability.

Here’s How Twitter Reacted To Unavailability Of DRS During Today’s Match Between CSK and MI At Wankhede:

Mumbai dropped Polly. So Polly did this. No DRS today 🤣 pic.twitter.com/0K7y3N0G4Q

Such a big league with so much money going into it and yet no DRS because of powercut?? Devon Conway was completely robbed there. That was another umpiring howler by the way! Made it look like such a straightforward decision when it was going so far down leg.#CSKvMI

Wait what? No drs? Such a huge event! What excuse is this? One wrong decision can crumble a team! Gunslinger reaction on the lbw !? 🤯🤷‍♂️ #IPL

No DRS because of a power cut at Wankhede 👀#CSKvsMI #IPL2022 pic.twitter.com/ihwjYdSrF0

So Convay got a dodgy LBW decision against him first ball of the game. And couldn’t challenge the decision as DRS isn’t available right now due to power cut at Wankhede. What to say #CSKvsMI

Stop this tournament. What is this nonsense. Richest board and richest league you know.

Golden duck for Conway, as there is no DRS, he can't review as well.

Greatest League in the world. LMAO

There is no DRS????? THIS IPL UMPIRING IS GOING WILD NOW.

Unlucky for Devon Conway, the ball was missing leg stump. He couldn't take the DRS due to powercut in the stadium. pic.twitter.com/kyaUJsZw9e

Benjamin Franklin, we have failed you today. Sorry that the electricity you discovered was used by some unethical ppl to manipulate cricket match outcome. 💔

No DRS available due to power cut in stadium. 😐 Devon Conway and Uthappa departs for LBW decision.

No DRS available in Chennai's innings due to powercut 😹 #CSKvsMI #IPL2022 #MIvsCSK pic.twitter.com/wJeVBjsQeJ

IPL gyaan: You are playing cricket’s wealthiest tournament and there is no DRS because of ‘technical issues; then you get a poor umpiring call in the first over. Umpiring in IPL 2022 has been below par. And am afraid at times very few in commentary call it out. #MIvsCSK

Same people who were celebrating on Rohit Sharma wicket that day are crying on No DRS today Im loving the tears 😂#CSKvsMI pic.twitter.com/4Epem36s0n

MI losing the matches in this IPL

Just hit the pads!! umpire will give out.. no DRS available
was umpire that dum clearly missing leg stumps..
mfs ruined the match https://t.co/ZcQ57HUQAN

Umpire would have got pen, paper, ruler, measuring tape out to calculate the trajectory of the ball himself if it was Dhoni that got out with no DRS

No DRS because of power cut🤬🤬

No DRS available due to powercut. Dude are you serious about this league @BCCI?

Also Read: CSK vs MI: “Maybe He Won’t Even Be There Next Year” – Aakash Chopra Surprised By CSK’s Treatment Of Ravindra Jadeja In The IPL 2022