England’s talisman James Anderson once again entered the record books as he became the second player with most Test caps.

The moment he stepped on the SCG pitch for the fourth Test against Australia, Anderson, playing in his 169th Test, surpassed the likes of former Australian players Ricky Ponting and Steve Waugh. Both Ponting and Waugh had played 168 Tests during their career.

Anderson is now only behind India’s legendary batsman Sachin Tendulkar who represented his country in 200 Tests between 1989-2013. 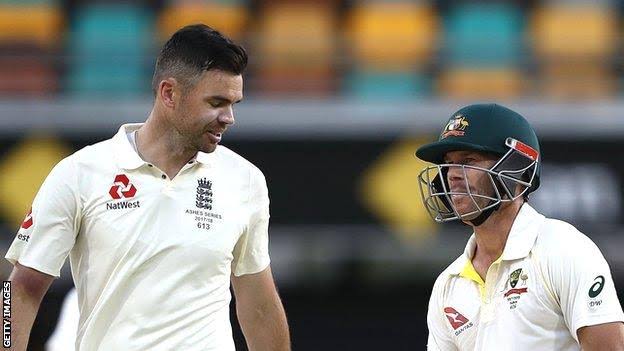 On a truncated Day 1 of the fourth Test, owing to rain showers, Anderson bowled an angled good length delivery, that pitched in the middle, to feather the outside edge of Australian opener Marcus Harris. England skipper Joe Root completed the catch in the second slip region to hand Anderson his 640th Test scalp.

After missing the Ashes opener in Brisbane, Anderson has taken eight wickets including 4/33 in Melbourne in the Ashes 2021-22 so far.

Anderson, who made his debut against Zimbabwe in 2003 at Lord’s, is just behind Australia’s Shane Warne (708) and Sri Lanka’s Muttiah Muralitharan (800) in the leading wicket-taker’s list in Test cricket.

The 39-year-old pacer is fervent to play Test cricket for more time as he has expressed his wish to get selected in England’s squad for the West Indies Test series in March.

“Personally, even in these challenging times, I feel in a really good place with my bowling and have done for a while. I will have to wait and see but I have no intention of finishing. I just want to keep working hard and I would love to be part of the West Indies tour in March,” Anderson wrote in his column for The Telegraph.

England have already lost the Ashes as they trail 0-3 in the five-match series and hence they failed to win another Test series in Down Under.

The Australians never let England settle right from the start of the first Test in Brisbane where they won by nine wickets inside four days.

They followed their success with a 275-run victory in Adelaide despite some dogged resistance by Jos Buttler to delay the result.

Australia thumped England on the third day of the Boxing Day Test match as they sealed the win by an innings and 14 runs to win the Ashes after leading 3-0.