IND vs NZ 2021: Rahul Bhai Spoke To Me And Asked Me To Control What Is In My Hands And Said, 'Go Out There And Give It Your Best'– Mayank Agarwal
Skip to content

Indian opening batsman Mayank Agarwal has said that the head coach Rahul Dravid spoke to him when he was picked for the New Zealand Test series and told him to focus on things that are in his hands and instructed him to give his best during the matches.

Mayank Agarwal was the star performer of the Indian team on Day 1 of the second Test match against New Zealand at Wankhede Stadium, Mumbai. He managed to smash incredible 120* runs despite not getting much support from the other hand. 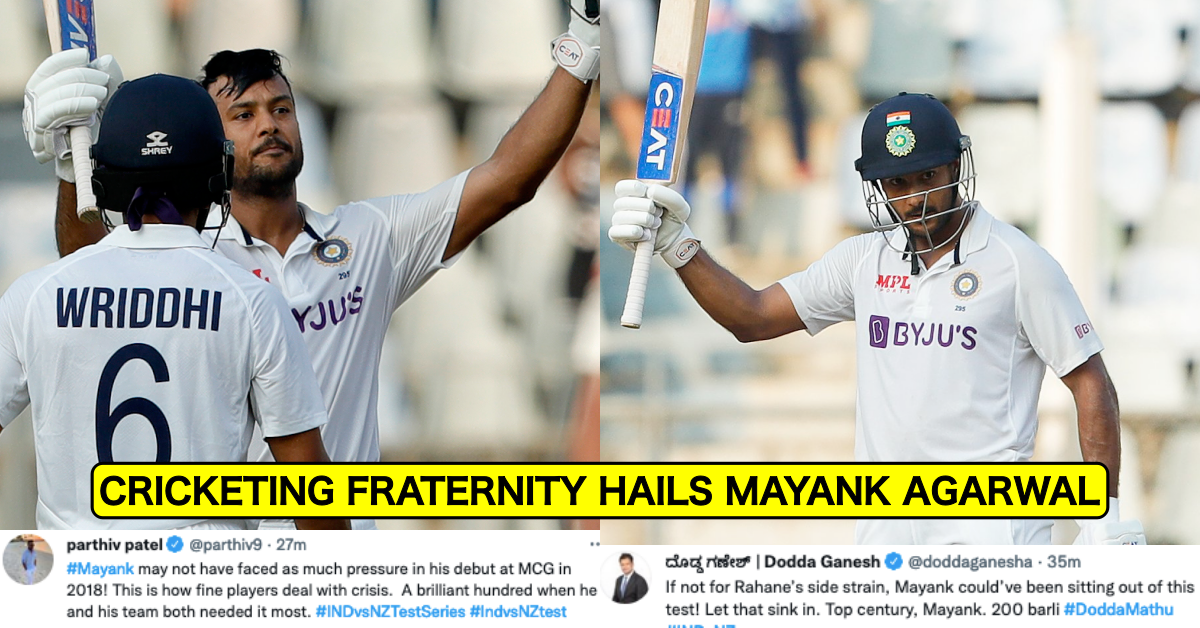 After the end of the day’s play, Mayank Agarwal said that he was happy to capitalise on the start he got. He stated:

“When I was picked, Rahul bhai spoke to me. He asked me to control what is in my hands and said, ‘go out there and give it your best’, He had told me ‘When you get set, make it big’. I am happy to have capitalised on the start that I had. But that message was very clear from Rahul Bhai, that I should make it count.”

Mayank also talked about his absence from the India XI in the recent England tour and said that he was unfortunate to miss out on the crucial game. He said:

“It was unfortunate for me to not have played in England, I got hit and there’s nothing much I could do about that. I accepted it and continued to work hard and work on my process and my game

Notably, Mayank was set to open the innings with Rohit Sharma in the India tour of England 2021 but just before the match he suffered an injury in a practice session and KL Rahul was given the opening slot and he performed exceptionally.

The 30-year-opener also talked about the advice he got from the legendary Indian batsman Sunil Gavaskar and said that he is trying to make adjustments. Mayank explained:

“He told me that I should consider keeping the bat a bit low initially in my innings. I have a tendency to hold it high. I couldn’t make that adjustment in this short period of time. When he was saying that, I noticed his shoulder position and basically picked up that I need to be more side on.”

Kiwi Spinner Ajaz Patel shined for New Zealand on Day 1 of the Mumbai Test as he managed to pick all 4 Wickets on the day. However, Mayank Agarwal smashed four sixes off left-arm spinner Ajaz Patel. Talking about Ajaz Patel, the Indian opening batsman lauded the spinner and said that they were trying to be a bit more attacking. He elaborated:

“He was bowling exceedingly well. But each time anything was in our half (our arc), the plan was to be a bit more attacking. Anything that came a little towards us in length, we were going to go for it. He had that phase when he tied us down, so it was a conscious decision to make it count when we could or each time he bowled it in our spot.”

Mayank further added that his inning was about ” grit and determination” and he tried to stick to his plan and be disciplined. He said:

“That is something I have thought about, but this innings was more about grit and determination, just to stick with the plan, be disciplined. I know I didn’t look good sometimes but I got the job done.”

“How we start is crucial, the focus is that. The first session we want to play it out, the wicket is going to get harder and harder to bat on,” he added.

Also Read: RCB Will Not Get Rashid Khan They Can Forget About That, Instead, They Will Go After Rahul Chahar – Aakash Chopra Feels RCB Will “Break The Bank” For Leg-Spinner